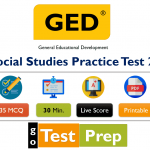 Note: in the actual Social Studies exam Calculator is allowed. The format of the question will be in Multiple choice and other question types (drag and drop, fill in the blank, select an area, and drop down).