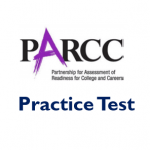 PARCC Practice Test 2023: Math and ELA Grades 3 to 11 [PDF]: The Partnership for Assessment of Readiness for College and Careers (PARCC) is a consortium featuring two states, the District of Columbia, the Department of Defense Educational Activity, and the Bureau of Indian Education, that work to create and deploy a standard set of K–12 assessments in Mathematics, and English (ELA), based on the Common Core State Standards.

As of March 25, 2014, only 14 states plus the District of Columbia remained in the PARCC consortium. States that had withdrawn included: Alabama, Colorado, Delaware, Florida, Georgia, Indiana, Kentucky, North Dakota, Pennsylvania, Tennessee, and Utah.

Do you want to know what taking the Mathematics portion of the PARCC Assessment is like? A practice test for each grade is available below for you to use to familiarize yourself with the kinds of items and formats used for the tests. Computer-Based Practice Test and Paper-Based Practice Tests.