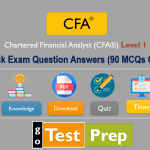 Successful candidates report an average of more than 300 hours preparing for each examination. Your preparation time will vary based on your prior education and experience, and you will probably spend more time on some study sessions than on others.