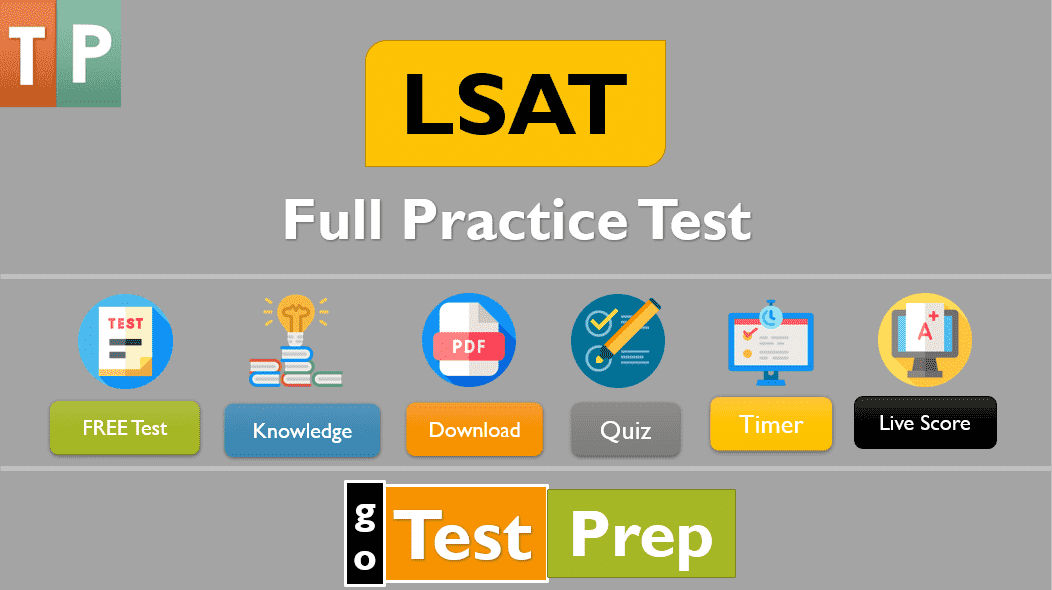 Try our LSAT Practice Test 2021 Study Guide [Free PDF]. it fees the real LSAT exam practice test. All of the tests are free no registration is required. All LSAT question answers are multiple-choice based quiz with a time limit. You can practice critical reading, analytical reasoning, logical reasoning, and persuasive writing skills for your upcoming LSAT exam prep or LSAT Flex Test prep online.

The Law School Admission Test (LSAT) is a standardized test and an integral part of law school admission. The Law School Admission Council (LSAC) administers the LSAT for prospective law school candidates. It is designed to assess reading comprehension as well as logical and verbal reasoning proficiency. Starting in September 2019, the multiple-choice portion of the LSAT is administered digitally in North America.

Important Note: The order in which the sections appear and the number of questions in each section will vary because there are several forms of the LSAT.

There is no penalty for guessing on the LSAT. Before taking a wild guess, remember that eliminating one or more of the choices increases your chances of choosing the right answer.

The following sections and the LSAT Writing will require no specific knowledge from any specialized course or courses. They purport to measure your reading, reasoning, and analytical skills. Remember, no formal background in law is required or necessary.

Each LSAT features two scored Logical Reasoning sections, each of which contains between 24 and 26 questions. Logical Reasoning questions ask you to critically dissect arguments and fact sets and make inferences from the statements, collectively referred to as the stimulus. Stimuli with argumentation can be followed by any one of the following question types: Main Conclusion, Flaw, Parallel (Reasoning), Parallel (Flaw), Necessary Assumption, Sufficient Assumption, Strengthen, Weaken, Evaluate, Principle (Identify), Principle (Apply), etc. Stimuli without argumentation, typically presented as factual information, tend to be followed by one of the following question types: Must Be True, Most Strongly Supported, Paradox, etc. A thorough understanding of formal logic principles, especially sufficient and necessary conditions, is helpful in answering the most difficult Logical Reasoning questions.

The Logic Games, or Analytical Reasoning section, is typically the most intimidating section for people starting out with their preparation. For most, taking a timed Logic Games section without any prior prep work in this area results in incomplete and inaccurate performance. LSAT Logic Games test your ability to deductively examine a framework of relationships and determine what must be true, what could be true, what is not necessarily true, and what cannot be true. Each Analytical Reasoning section consists of exactly four games, or puzzles, and each game is followed by between five and eight questions. Logic Games tend to hinge on at least one of three recurring themes: ordering, grouping, and assignment.

The Reading Comprehension section of the test is generally the most familiar of the three scored section types. Consequently, it can be the most difficult of the three-section types in which to make gains. Each Reading Comprehension section features four passages, each followed by between five and eight questions. Since the June 2007 administration (available as a free PrepTest at www.lsac.org), every Reading Comprehension section has featured one set of comparative passages in place of one of the single passages. Since none of the Prep Tests in this book contain comparative reading passages, we highly recommend that you purchase some of the most recent tests, either individually through officail, or by picking up a copy of 10 More Actual, Official Recent LSAT Prep Tests or 10 Very Recent Actual, Official LSAT Prep Tests. The questions test your command of both global ideas and fine details presented in the passages. Reading Comprehension questions routinely inquire about authors’ views, outside views, main points, definitions, passage structures, argumentative functions, and general inferences.

Since most law school exams involve writing under timed pressure, the LSAT includes a timed Writing Sample, administered as the sixth section of the test. It is unscored. However, each law school to which you apply will receive a copy of your Writing Sample. Thus, it is important that you at least exert some effort in framing an appropriate argument for the topic at hand. The writing prompt is given in the form of a decision prompt. A scenario will be presented, followed by two distinct courses of action. Your job is to persuasively argue one of the two choices. There is no “right” or “wrong” answer; each side will have both positives and negatives. Make sure to write legibly, and back up your position clearly and concisely.