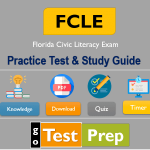 The Florida Civic Literacy Exam (FCLE) is a computer-based assessment that measures students’ civic literacy knowledge. In 2021, legislation was passed that requires all students enrolled in a U.S. Government course in high school to take the assessment.

The purpose of the FCLE Practice Test with Study Guide is to orient faculty and students to the types of questions on the Florida Civic Literacy Examination. The sample questions and answers are not intended to demonstrate the length of the actual test; however, each of the four outcomes assessed on the FCLE Practice Test are represented in the same proportion on the sample test as on the actual test (approximately 25% each).

Undergraduate students must complete the State of Florida’s Civic Literacy requirement prior to receiving their bachelor’s degree. Depending on when a student first enters a Florida public college or university. The test includes 80 multiple-choice questions and four sections with 20 questions in each section (American Democracy, United States Constitution, Founding Documents, and Landmark Impact on Law and Society).

A 60 % is needed to pass the exam, which equals 48 questions correct out of the 80 total questions. The FCLE is untimed and takes approximately 1 hour and 30 minutes to complete. Retesting requires a 30-day waiting period.

American Democracy (20 questions): Understanding of the basic principles and practices of American democracy and how they are applied in our republican form of government.

Founding Documents (20 questions): Knowledge of the founding documents and how they have shaped the nature and functions of our institutions of self-government.

Landmark Impact on Law & Society (20 questions): An understanding of landmark Supreme Court cases, landmark legislation and landmark executive actions and their impact on law and society.

You will know if you have passed the exam within 15 to 30 minutes of completing the exam. Test results will appear within your Falcon Self-Service portal within 24 hours if the exam was taken at a DSC testing location.

CPALMS is introduced as one place to access supplemental resources, but it is not intended to be an exhaustive source. CPALMS is an online toolbox of information, vetted resources, and interactive tools that helps educators effectively implement teaching standards. It is the State of Florida’s official source for standards information and course descriptions. Where CPALMS resources are available, links have been provided. In some instances, additional hyperlinks drawing from the National Archives, United States government and Florida government websites, and www.oyez.org have been included.