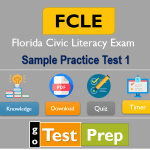 FCLE Practice Test 2022 (Sample Questions and Answers): There are 40 multiple-choice items. You can test your knowledge for better The Florida Civic Literacy Exam (FCLE) preparation better. You can check your score at the end of the quiz.