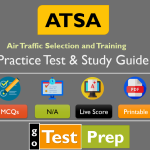 ATSA Practice Test 2022 Air Traffic Controller Aptitude Test: Try our free Air Traffic Selection and Training Aptitude Test (AT-SAT) review question answers. It will help your ATSA Test Prep better. Air Traffic Control Career Prep was written with two purposes in mind. First, to introduce the reader to the aviation industry, the role of the FAA, and what to expect as one pursues a career in air traffic control.

Secondly, to discuss the general format of the Air Traffic Selection and Training Aptitude Test (AT-SAT) and give readers ample practice sets to study, in preparation for that test. We provide pertinent information related to an air traffic control career, designed to help readers improve their chances of earning a high score on the test and becoming a candidate for an air traffic control position

The Air Traffic Selection and Training (AT-SAT) Examination is divided into eight separate parts seven cognitive tests and one non-cognitive. The cognitive tests are Applied Math, Air Traffic Scenarios, Scan, Letter Factory, Analogies, Angles, and Dial Reading. The non-cognitive measuring portion of the AT-SAT, what was the “Experience Questionnaire,” is now called the Biographical Questionnaire (BQ), and it is completed at the front end of the application process.

The FAA provides air traffic services for the world’s largest and busiest airspace. Tens of thousands of aircraft are guided safely and expeditiously every day through America’s National Airspace System to their destinations.

The United States has had a federal air traffic control (ATC) system since 1935. Today’s FAA is the result of many citizens, pilots, legislators, airline companies, military services, and government agencies seeking ways to best serve this country’s aviation interests and needs.

The FAA is not an independent agency; it is part of the Department of Transportation (DOT). The DOT is managed by the Secretary of Transportation, a cabinet-level position, secured by direct presidential appointment and confirmed by Congress. The NAS consists of air traffic control, airports, airmen, aircraft, and airways. (Think of them as highways in the sky.) The FAA employs over 45,000 people to keep the airways and airspace safe and ensure the efficient use of the NAS, 24 hours a day, 365 days a year.

o become an air traffic controller, a person must pass a pre-employment test that measures his or her ability to learn the controller’s duties in order to qualify for job openings. The Collegiate Training Initiative (CTI) program is one of several methods used by the FAA to recruit and hire controller applicants; the others include military veterans, military retirees (Phoenix-20 program), FAA reinstatements (PATCO), Flight Service employees, AT-SAT direct hire, and Academy applications.

As of November 2013, the AT-SAT pre-employment test is currently offered only to students in the CTI program but this might change if the FAA decides to start hiring again from the general population (known as “off-the-street”). In addition, applicants must have 3 years of full-time work experience or 4 years of college, or a combination of both. In combining education and experience, 1 year of undergraduate study (30 semester or 45 quarter hours) is equivalent to 9 months of work experience.

Some further good sources of background and study materials are as follows (check for the most current versions for the FAA Orders at www.faa.gov/atpubs/):

AT scenarios practice test is included in the software available for download (www.asa2fly.com/reader/atc). These websites also may help: