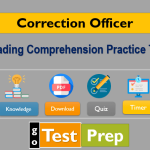 You will need to read the passage, understand the information, and draw logical inferences from the material. This test covers the most essential reading comprehension strategies for success on your exam. You will learn to become an active reader, distinguish between the main idea and supporting details, and recognize information that is implied, but not stated, in the passage.