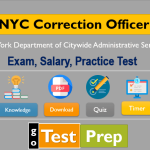 If you want to know whether or not a career as a corrections officer suits you, keep reading. This page describes typical duties, the fast-growing job prospects, and the nature of the work. You will find information about the hiring process and tips on making yourself a top-notch candidate. You will also find plenty of facts about current trends in corrections at the federal, state, and local levels.

TODAY’S CORRECTIONS OFFICER needs to be a quick thinker, an able learner, a good leader, and physically and emotionally intense. These are essential traits because it takes a variety of skills and knowledge—not to mention stamina—to do this job. Officers work in stressful, sometimes dangerous settings, where their job is to maintain security and order.

This work requires training in areas such as understanding criminal behavior, knowing how to deal with groups of inmates who come from different cultural and ethnic backgrounds, and managing the tension that builds among people who are confined to cells and cut off from the outside world.

Technical knowledge is also becoming more important for this job. Where budgets allow, many facilities are putting in high-tech safety and security devices. Corrections officers have to be able to operate these sophisticated systems.

There is also a lot to cope with in terms of working conditions. Today, many prisons are overcrowded and underfunded, more violent offenders are behind bars than ever before, and drug use among inmates is widespread. These and other major changes in the prison system have added strain to an already strained environment.

The written exam, if one is required, is your first opportunity to show that you have the skills needed to be a corrections officer. Therefore, this written exam is –BECOMING A CORRECTIONS OFFICER– 8 extremely important.

Most exams are multiple-choice tests of the sort you probably encountered in school. You get an exam book and an answer sheet where you select an answer choice, by filling in circles (bubbles) or squares with a number 2 pencil.

Written Comprehension: Understanding written sentences and paragraphs. Example: A Correction Officer may use this ability to interpret policies and regulations in a correctional facility and carry out procedures based on the written materials.

Mathematical Reasoning: understanding and organizing a problem and then selecting a mathematical method or formula to solve the problem. It encompasses reasoning through mathematical problems to determine appropriate operations that can be performed to solve problems. Example: A Correction Officer may use this ability to calculate average number of miles driven for each tour. Deductive Reasoning: applying general rules to specific problems and coming up with logical answers. It involves deciding if an answer makes sense. Example: A Correction Officer may use this ability to assign inmates tasks and jobs, and needs to determine which tasks can be assigned to which inmate using specific rules.

Inductive Reasoning: combining separate pieces of information, or specific answers to problems, to form general rules or conclusions. It involves the ability to think of possible reasons for why things go together. Example: A Correction Officer may use this ability to determine the validity of inmate complaints based on information such as observations and discussions with inmates.

Information Ordering: correctly following a rule or set of rules of actions in a certain order. The rule or set of rules used must be given. The things or actions to be put in order can include numbers, letters, words, pictures, procedures, sentences, and mathematical or logical operations. Example: A Correction Officer may use this ability to report for roll call ready to receive work assignment orders and ready to be instructed to do things in a particular order.

Spatial Orientation: determining where you are in relation to the location of some object or where the object is in relation to you. Example: A Correction Officer may use this ability to appear before the criminal court and may need to find the most direct route in a given map.

Visualization: imagining how something would look when it is moved around or when its parts are moved or rearranged. It requires the forming of mental images of how patterns or objects would look after certain changes, such as unfolding or rotation. One has to predict how an object, set of objects, or pattern will appear after the changes have been carried out. Example: A Correction Officer may use this ability to identify the location of an item or items after entering a room through a different entrance.

Correction Officers, under supervision, maintain security and are responsible for the care, custody, control, job training, and work performance of sentenced and detained inmates within New York City correctional facilities.

They supervise inmate meals, visits, recreational programs, and other congregate activities; inspect assigned areas for conditions which threaten safety and security; conduct searches in order to detect contraband; complete forms and reports; maintain appropriate log books; communicate with other area Correction Officers to exchange pertinent information; issue verbal orders, announcements and explanations to inmates; observe inmates and make recommendations concerning medical and/or psychiatric referrals; safeguard Department supplies and equipment; escort inmates within and outside of the facility including their transportation in Departmental vehicles; respond to unusual incidents and disturbances; enforce security procedures in accordance with Department guidelines; request medical assistance for inmates when necessary; count and verify the number of inmates present in assigned areas; verify identification of inmates; supervise inmates of either sex; operate a motor vehicle; and perform related work.

The current minimum salary is $47,857 per annum. This rate is subject to change. Incumbents will receive salary increments reaching $92,073 per annum at the completion of five and one-half years of employment. There is an annual uniform allowance of $1,100 and contributions by the City to Welfare and Annuity Funds and City-paid health insurance.