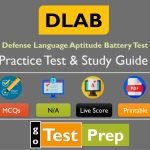 The Defense Language Aptitude Battery (DLAB) is a test used by the United States Department of Defense to test an individual’s potential for learning a foreign language and thus determine who may pursue training as a military linguist. It consists of 126 multiple-choice questions and the test is scored out of a possible 164 points

The DLAB is a test like no other. It doesn’t ask you straightforward questions. It instead tries to gage your ability at performing something by asking you to answer things that aren’t obvious. You have already seen an overview of the test layout and have access to a comprehensive DLAB practice test. We highly recommend that you take advantage of that practice test and take it seriously.

The questions are representative of the types of questions you should expect to see on the DLAB Test; however, they are not intended to match exactly what is on the exam.

Any application to a defence language school or to a language-centric community will require the service member to take the Defense Language Aptitude Battery Test (DLAB). It is a standardized test that was developed to measure the applicant’s aptitude for language studies and is thought to be a good mechanism in measuring their capacity to learn a new language.

As such, the military takes the scores very seriously and believes that it is a good indicator of the applicant’s chances of surviving a tough language school like DLI. According to school statistics, there is a strong link between high DLAB scores and good performances at DLI. The military strongly believes that the DLAB gives the administrators an adequate way in which to identify those service members who show a skill for learning a language and those who will struggle.

*Applicants should never leave a question blank. There is no penalty for wrong answers so a guess is better than no answer.

The audio portion is split into five sections—Stress Syllables, Nouns and Adjectives, Possessives, Verbs and Subject/Objects and Comprehensive Rules. The test won’t call them this, we only use these titles to help you organize your training and studying.

How does taking the DLAB help my military career?

Your DLAB score will also determine which category of languages you can be assigned to. The category system was developed due to the difference in difficulty between certain languages. In the category system, those languages that are believed to be the hardest are designated as a category IV. The easiest languages are placed in category I. Their designation is based off of lettering systems, grammatical structures, intonations and overall difference from the English language. The scores required for each category are as such

A high DLAB score is also a great way for a service member to set themselves apart from their colleagues. Many service members have taken the DLAB test and superiors will use it to determine promotions and assignments. DLAB scores have a tendency to follow a service member throughout their career and can be a great asset, if the result is good.

While these scores are required to enter a language program of that category, often placement is based upon need rather than score. For example, a service member that receives a score of 115 (good enough for Category IV) may be placed in Russian (Category III). Previously, the maximum score on the DLAB was 176, but has now been lowered to 164 recently, as of 2016.

Who can take the DLAB?

All U.S. service members and their spouses who are in good standing with the military can take the test. Although it’s rare, spouses can sometimes take language courses with service members. Just like the service member, they too will need to take the DLAB to apply.