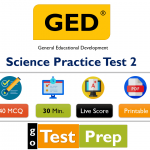 Read the questions carefully and choose the best answer for each question. Some questions may refer to a passage, illustration, or graph. Be sure to answer every question; you will not be penalized for incorrect answers. Do not spend too much time on any one question so you can be sure to complete all the questions in the allotted time.

When answering multiple-choice questions, make sure you have read the question carefully. Often, the question will ask you to choose a statement that is NOT true or find an exception to the rule.