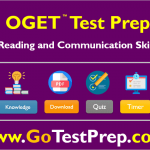 For all questions: Read each passage. Then answer each question carefully by choosing the best answer.

Should you be required to wear a seat belt in a moving car? How many days a year should you be required to attend school? These and other similar questions are discussed and answered by your senators—elected politicians who are authorized to institute, amend, or eliminate Oklahoma laws. Forty-nine of the fifty states in the United States have a House of Representatives and a Senate. These two-house systems are called bicameral legislatures. Oklahoma is unique in that it is the only state in the country that has just one legislative body.

The Nature of a Unicameral Legislature

A one-house system is called a unicameral legislature. In 1934 Oklahomans voted to do away with the House of Representatives.

In all other states, a bill, or proposed law, is first proposed by a member of the House or Senate. If the bill is passed by that particular legislative body, then it is passed on to the other legislative body and must be passed there, too. So, both the House and the Senate have to vote on and approve a bill before it can become a law. In Oklahoma, however, a bill is discussed and voted on only by the Senate.

How a Bill Becomes a Law in Oklahoma

Oklahoma is divided into 49 equal districts. Each district has about the same population. Voters in each district elect a senator to represent them for four years. A senator must be at least 21 years old and have lived in the district for at least a year.

The senator takes the idea for a law to the capital and writes it up as a bill. A bill in Oklahoma may contain only one subject. Therefore, everyone is clear on exactly what is being discussed and voted on. The bill is filed with the clerk of the legislature, who reads its title aloud to all the senators and distributes written copies. Bills then get a public hearing in front of a committee of senators. Citizens can speak up and express their opinions at these hearings. After the hearing, the committee votes on whether to send the bill to the full legislature, to postpone it, or to defeat it.

If the bill goes to the full legislature, it is discussed and debated openly. Committees and individual senators can propose amendments, or changes, to the bill. The resulting draft is voted on. If a majority of senators (25 of the 49) approve it, then it has received general approval and moves on to the next stage of consideration.

The next stage involves discussion and debate of details. Amendments might be made, or the bill might be dropped. If a vote is taken and a majority of senators approve the bill in its new detailed form, then it moves on for a final reading. In the final reading, the entire bill is read aloud to the whole senate and voted on for the final time. If the bill passes the vote, then it is sent to the governor for his or her approval. If the governor signs the bill or chooses to ignore it, then the bill becomes a law. If the governor vetoes the bill, a vote of 30 senators is needed to make the bill a law.

Oklahoma’s Choice
Oklahomans made the change from a bicameral legislature to a unicameral one for a number of reasons. For one, the state of Oklahoma believes that a unicameral system is less expensive to support. In a bicameral system, there are many more politicians to pay and more building space needed than in a unicameral system. Having only senators discuss a bill and vote on it could be more efficient, both financially and logistically. In the unicameral system, ample time is allotted to carefully discuss everything in different stages but without inefficient repetition. Time and energy could be saved by not reviewing the same bill in two separate legislative bodies.

In addition, Oklahoma believes that a unicameral system tends to keep the focus on a bill. In a bicameral system, bills are sometimes altered in order to convince members of both the House and the Senate to vote for them. The original intent might get lost. Discussions, in general, are focused on the proposed law and its intent, rather than on how to get it passed by another legislative body.

Support for the Bicameral Legislature
If a unicameral legislature is so much more preferable, then why would other states choose to have a bicameral legislature instead? Some argue that the bicameral system ensures more thorough deliberation over a bill, since it has to be debated and passed by both the House and the Senate.

Bicameral legislatures believe that their process actually saves time; if one legislative body rejects a bill, then the other body does not need to take the time to debate it. There are also more leaders involved in the passing of the bill, so this could provide better “checks and balances,” ensuring that no one group of leaders has too much law-making power.

Another benefit of a bicameral legislature could be that, because there are more legislative leaders in the state, there are more opportunities for citizens to make contact with them and express their views to them. Also, members of the House of Representatives in other states serve two-year terms, instead of the four-year terms that Senators serve, so citizens may feel they have more frequent control over who their elected lawmakers are.

Empowered Citizens
Regardless of which legislative structure is best, lawmakers in Oklahoma and all across the country are working hard to make the best choices for the citizens of their states. Citizens of Oklahoma can propose a new law to the senator of their district. They can attend the public hearing in which their bill is discussed. They can even speak up at the hearing and explain more fully why the law they propose should be passed. Citizens can best support lawmakers by staying involved with current events and making their voices heard.

Q1. Which sentence from the passage BEST supports the inference that a unicameral legislative system simplifies the lawmaking process?

Show Answers
Answer: D. Time and energy could be saved by not reviewing the same bill in two separate legislative
bodies.

Q2. The characteristic “includes House of Representatives” is a feature of

Q3. The characteristic “makes decisions about state laws” is a feature of

Q4. The characteristic “usually saves time in law-making process” is a feature of

Q5. How does the organizational pattern used in the section How a Bill Becomes a Law in Oklahoma help the reader?

Q6. How does the last paragraph contribute to the author’s purpose?

Show Answers
Answer: B. It engages the reader by showing he or she can be involved in the law-making process.

7. This question has two parts. Answer part A, then answer part B.

Q) Part A. How might the author’s perspective influence the reader?

Show Answers
Answer: B. By focusing mainly on the processes and benefits of the unicameral system, the author helps the reader to understand why Oklahoma has selected a unicameral legislature.

Which sentence from the passage BEST supports the answer in part A?

Show Answers
Answer: A. Having only senators discuss a bill and vote on it could be more efficient, both financially and logistically.

Q9. Maria created this flow chart called “How a Bill Becomes a Law in Oklahoma”  based on the information in the passage. 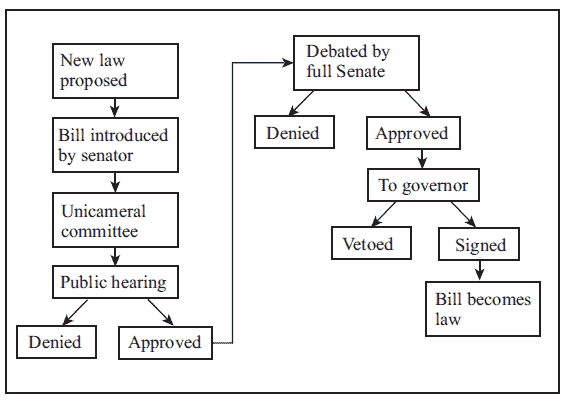 What could Maria do to BEST improve her flow chart?

Show Answers
Answer: D. add missing information about some outcomes of the process.

Q10. How does the author’s purpose contribute to the validity of the passage?

Show Answers
Answer:C. The author’s intent to inform ensures that the author uses authentic facts to convey the information in the passage.