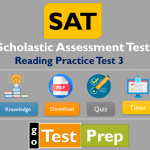 Questions 1–10 are based on the following passage and supplementary material.

Experts often suggest that crime resembles an epidemic. But what kind? Economics professor Karl Smith has a good rule of thumb for categorizing epidemics: If it spreads along (5) lines of communication, he says, the cause is information. Think Bieber Fever.1 If it travels along major transportation routes, the cause is microbial. Think influenza. If it spreads out like a fan, the cause is an insect. Think malaria. But (10) if it’s everywhere, all at once—as both the rise of crime in the ’60s and ’70s and the fall of crime in the ’90s seemed to be—the cause is a molecule.

A molecule? That sounds crazy. What molecule could be responsible for a steep and (15) sudden decline in violent crime?

Well, here’s one possibility: Pb(CH2CH3)4. In 1994, Rick Nevin was a consultant working for the US Department of Housing and Urban Development on the costs and benefits of (20) removing lead paint from old houses. A growing body of research had linked lead exposure in small children with a whole raft of complications later in life, including lower IQ, hyperactivity, behavioral problems, and learning disabilities. (25) A recent study had also suggested a link between childhood lead exposure and juvenile delinquency later on. Maybe reducing lead exposure had an effect on violent crime too?

Intriguingly, violent crime rates followed the (40) same upside-down U pattern (see the graph). The only thing different was the time period. Crime rates rose dramatically in the ’60s through the ’80s, and then began dropping steadily starting in the early ’90s. The two curves looked eerily (45) identical, but were offset by about 20 years.

So Nevin dug up detailed data on lead emissions and crime rates to see if the similarity of the curves was as good as it seemed. It turned out to be even better. In a 2000 paper he concluded (50) that if you add a lag time of 23 years, lead emissions from automobiles explain 90 percent of the variation in violent crime in America. Toddlers who ingested high levels of lead in the ’40s and ’50s really were more likely to become violent (55) criminals in the ’60s, ’70s, and ’80s. And with that we have our molecule: tetraethyl lead, the gasoline additive invented by General Motors in the 1920s to prevent knocking and pinging in high-performance engines. As (60) auto sales boomed after World War II, and drivers in powerful new cars increasingly asked service station attendants to “fill ’er up with ethyl,” they were unwittingly creating a crime wave two decades later.

(65) It was an exciting conjecture, and it prompted an immediate wave of . . . nothing. Nevin’s paper was almost completely ignored, and in one sense it’s easy to see why—Nevin is an economist, not a criminologist, and his paper (70) was published in Environmental Research, not a journal with a big readership in the criminology community. What’s more, a single correlation between two curves isn’t all that impressive, econometrically speaking. Sales of vinyl LPs rose (75) in the postwar period too, and then declined in the ’80s and ’90s. No matter how good the fit, if you only have a single correlation it might just be coincidence. You need to do something more to establish causality. (80)

(85) The gasoline lead hypothesis helps explain some things we might not have realized even needed explaining. For example, murder rates have always been higher in big cities than in towns and small cities. Nevin suggests that, (90) because big cities have lots of cars in a small area, they also had high densities of atmospheric lead during the postwar era. But as lead levels in gasoline decreased, the differences between big and small cities largely went away. And guess (95) what? The difference in murder rates went away too. Today, homicide rates are similar in cities of all sizes. It may be that violent crime isn’t an inevitable consequence of being a big city after all. 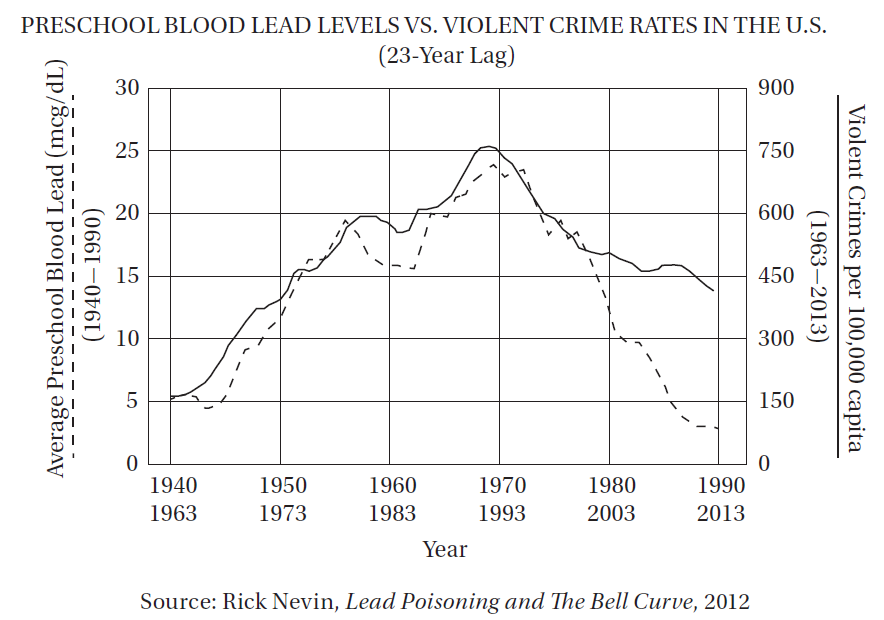 Q1. In the first paragraph, Karl Smith’s work is presented primarily as

Let’s translate this question into a “stand-alone” question: “How is Smith’s work presented in the first paragraph?” The passage states (line 3) that Karl Smith has a good rule of thumb for categorizing epidemics, then goes on to describe various types of epidemics in an effort to help visualize the types of spread. In other words, he is proposing a model for conceptualizing phenomena. (Note that the word phenomena refers simply to common occurrences. It has a neutral tone, not a positive one.

Q2. The author suggests that promising research in the social sciences is sometimes ignored because it

Q3. Which of the following provides the strongest evidence for the answer to the previous question?

As the explanation to question 2 indicates, the evidence for this answer is lines 67–72, which includes the statement in (C).

Q4. According to the graph for which of the following time periods was the percent increase in per capita violent crime the greatest?

Q5. According to the graph, which decade of violent crime statistics provides the LEAST support to Rick Nevin’s hypothesis?

Nevin’s hypothesis is phrased in the form of a question in lines 27–28: Maybe reducing lead exposure had an effect on violent crime too? Therefore, the portion of the graph that would least support his hypothesis is the portion that shows the least correlation between lead exposure and crime. The biggest gap in the two graphs (and hence the portion that provides the least support for his thesis) corresponds to the set of violent crime statistics from 2003 to 2013.

Q6. The author mentions “sales of vinyl LPs” (line 74) primarily as an example of

The sales of vinyl LPs are mentioned to describe a statistic that also happens to correlate with preschool blood lead levels, thereby making the point that a single correlation between two curves isn’t all that impressive, econometrically speaking . . . No matter how good the fit, if you only have a single correlation it might just be coincidence. Hence, it is a statistic that may be more coincidental than explanatory.

The sentence in lines 21–24 indicates that lead exposure in small children [had been linked] with a whole raft of complications later in life, including lower IQ, hyperactivity, behavioral problems, and learning disabilities. These complications are psychological problems for those exposed to lead at a young age.

Q8. The author regards the “drivers” in line 60 as

When the passage states that the drivers were unwittingly creating a crime wave two decades later (lines 63–64), it indicates that they were inadvertent abettors.

The phrase even better (line 49) refers to the finding mentioned in the previous sentence that the similarity of the curves was as good as it seemed, suggesting that the data showed an even stronger correlation than Nevin had hoped.