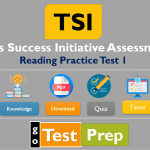 TSI Reading Practice Test 2023. You can download our Sample Questions Answers in printable PDF. It will help you prepare for your Texas Success Initiative Assessment Exam online.

Questions 1 and 2 are based on the following passage.

Voting is a privilege some people may take for granted, but it is one of our most precious rights.

In 1997, Vermont State representative Sydney Nixon was seated as an apparent one vote winner, 570 to 569. Mr. Nixon resigned when the State House determined, after a recount, that he had actually lost to his opponent Robert Emond 572 to 571. In 1989, a Lansing, Michigan School District millage proposition failed when the final recount produced a tie vote 5,147 to 5,147. On the original vote count, votes against the proposition were ten more than those in favor. The result meant that the school district had to reduce its budget by $2.5 million.

Q1. Which sentence best summarizes the content of this passage?

Questions 3 and 4 are based on the following passage.

Mr. Hopkins, the governor of Hartford upon Connecticut, came to Boston, and brought his wife with him, (a godly young woman, and of special parts,) who was fallen into a sad infirmity, the loss of her understanding and reason, which had been growing on her diverse years, by occasion of her giving herself wholly to reading and writing, and had written many books. Her husband, being very loving and tender of her, was loath to grieve her; but he saw his error, when it was too late. For if she had attended to her household affairs, and such things as belong to women, and not gone out of her way and calling to meddle in such things as are proper for men, whose minds are stronger, etc., she had kept her wits, and might have improved them usefully and honorably. He brought her to Boston, and left her with her brother, one Mr. Yale, a merchant, to try what means might be had here for her. But no help could be had.

Q3. The author of this passage is most likely

Q4. Which of the following best states the main idea of this passage?

Questions 5 and 6 are based on the following passage about the Great Depression.

The worst and longest economic crisis in the modern industrial world, the Great Depression in the United States had devastating consequences for American society. At its worst (1932–1933), more than 16 million people were unemployed, more than 5,000 banks had closed, and over 85,000 businesses had failed. Millions of Americans lost their jobs, their savings, and even their homes. The homeless built (5) shacks for temporary shelter—these emerging shantytowns were nicknamed “Hoovervilles,” a bitter homage to President Herbert Hoover, who refused to give government assistance to the jobless. Farmers were hit especially hard. A severe drought coupled with the economic crisis ruined small farms throughout the Great Plains as productive farmland turned to dust and crop prices dropped by 50%. The effects of the American depression—severe unemployment rates and a sharp drop in the production and sales of goods—could also be felt abroad, where many European nations were still struggling to recover from World War I.

Q5. The passage is most likely an introduction to which of the following?

Q6. The author cites the emergence of “Hoovervilles” (line 5) as an example of

Questions 17 to 20 are based on the following passage.

Three Pintail ducks from North America were shot in widely separated places in far distant parts of the world: one duck was taken near Cali, Colombia, South America; one on an island in the Pacific; and the last along the Dart River in England. The South American hunter learned that his duck had come from North Dakota. The weatherman in the Pacific discovered that his bird had been in northern California, more than 4,600 miles away, just 3 months before. The English sportsman found that his Pintail duck just 21 days before had been in Labrador, some 2,200 miles across the Atlantic. How did these hunters know their ducks had come from North America?

It really isn’t such a mystery as it might seem. On the leg of each duck the hunter had found a small aluminum band, which carried a number and a request that the finder of the band report to the Fish and Wildlife Service in Washington, DC, USA. Each hunter did exactly that. When their letters reached the Service in Washington, they were sent to the Bird Banding Office where the band number, species, date of banding, place of banding, and name of the bander are recorded. When people send in bands they have found, the record can be located quickly

Q7. According to the details in the first paragraph, how many ducks were shot?

Q8. The main purpose of the first paragraph is to

Q9. According to the information in the second paragraph, the hunters were able to trace the origin of their birds because

Q10. Which of the following conclusions can be drawn from the second paragraph?

Questions 11–12 are based on the following passage about snake venom.

Snake venom is one of the most effective methods of self-preservation in the animal kingdom. It is, essentially, toxic saliva composed of different enzymes that immobilizes prey. One type of toxin, known as a hemotoxin, targets the victim’s circulatory system and muscle tissue. The other is called a neurotoxin, and it affects the nervous system by causing heart failure or breathing difficulties. Although deadly, some snake venoms have been found to have curative properties. In fact, toxinologists, herpetologists, and other scientists have used the venom of a Brazilian snake to develop a class of drugs that is used to treat hypertension

Q11. What is the best synonym for immobilizes as it is used in line 2?

Q12. The final sentence of the passage (lines 5–6) serves primarily to