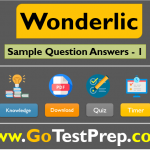 Wonderlic Practice Test 2023 Sample Question Answers [PDF]: Created in 1936 by E. F. Wonderlic, the Wonderlic Personnel Test was the first short-form cognitive abilities test. It was developed to measure general cognitive ability in the areas of math, vocabulary, and reasoning.

The Wonderlic test is continually being updated with repeated evaluations of questions. Originally designed to aid in employee selection of companies such as AT&T and Oscar Meyer in the 1940s, the Wonderlic Personnel Test has also been used by both the United States Armed Forces and the National Football League for selection purposes.

The Wonderlic Cognitive Ability Test was developed to measure the ability of prospective employees in areas such as problem-solving and learning. The NFL now administers the Wonderlic test to all players entering the draft, as an aid in predicting future performance.

The assessment is available in 12 different languages and is often used in all types of employment hiring from entry-level to executive level. It consists of 50 multiple-choice questions to be answered in 12 minutes

The types of questions that have appeared in the oldest versions of the Wonderlic test include: analogies, analysis of geometric figures, arithmetic, direction following, disarranged sentences, judgment, logic, proverb matching, similarities, and word definitions