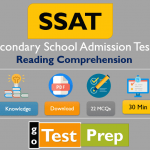 Directions: Read each passage and answer the questions that follow it.

If you are asked the color of the sky on a fair day in summer, your answer will most probably be “blue.” This answer is only partially correct. Blue sky near the horizon is not the same kind of blue as it is straight overhead. Look at the sky some fine day and you will find that the blue sky near the horizon is slightly greenish. As your eye moves upward toward the zenith, you will find that the blue changes into pure blue, and finally shades into a violet-blue overhead.

Have you heard the story of a farmer who objected to the color of the distant hills in the artist’s picture? He said to the artist, “Why do you make those hills blue? They are green, I’ve been over there and I know!”

The artist asked him to do a little experiment. “Bend over and look at the hills between your legs.” As the farmer did this, the artist asked, “Now what color are the hills?”

The farmer looked again, then he stood up and looked. “By gosh, they turned blue!” he said.

It is quite possible that you have looked at many colors that you did not really recognize. Sky is not just blue; it is many kinds of blue. Grass is not plain green; it may be one of several varieties of green. A red-brick wall frequently is not pure red. It may vary from yellow-orange to violet-red in color, but to the unseeing eye it is just red brick.

Q1. Which title best expresses the ideas of this passage?

The main idea, the topic of this passage, is looking closely at colors in order to truly recognize them. The farmer is the vehicle for making the point, and the sky and hills are used as illustrations.

Q2. At the zenith, the sky is usually

The last sentence of the first paragraph gives you this detail.

Q3. The author suggests that

You should be able to infer this answer from the passage. If not, you can choose the correct answer by eliminating all the other choices as being ridiculous.

Q4. The word zenith in the first paragraph probably refers to

Reread the first paragraph carefully if you got this wrong. The phrase “moves up toward the zenith” should lead you to the correct answer.

While the Europeans were still creeping cautiously along their coasts, Polynesians were making trips between Hawaii and New Zealand, a distance of 3,800 miles, in frail canoes. These fearless sailors of the Pacific explored every island in their vast domain without even the simplest of navigational tools.

In the daytime, the Polynesians guided their craft by the position of the sun, the trend of the waves and wind, and the flight of seabirds.

Stars were used during long trips between island groups. Youths studying navigation were taught to view the heavens as a cylinder on which the highways of navigation were marked. An invisible line bisected the sky from the North Star to the Southern Cross.

In addition to single canoes, the Polynesians often used twin canoes for transpacific voyages. The two boats were fastened together by canopied platforms that shielded passengers from sun and rain. Such crafts were remarkably seaworthy and could accommodate 60 to 80 people, in addition to water, food, and domestic animals. Some of these vessels had as many as three masts.

These Pacific mariners used paddles to propel and steer their canoes. The steering paddle was so important that it was always given a personal name. Polynesian legends not only recite the names of the canoe and the hero who discovered a new island but also the name of the steering paddle he used.

Q5. Which title is best for this selection?

View Correct Answer
Answer: D You should have no trouble finding the main idea of this passage

Q6. The Polynesians made trips to

The first sentence of the last paragraph makes clear that mariners are people.

Q8. This passage suggests that the Polynesians

The seasonal comings and goings of birds have excited the attention and wonder of all sorts of people in all ages and places. The oracles of Greece and the augurs of Rome wove them into ancient mythology. They are spoken of in the Books of Job and Jeremiah.

Nevertheless, it has been difficult for many to believe that small birds, especially, are capable of migratory journeys. Aristotle was convinced that the birds that wintered in Greece were not new arrivals, but merely Greece’s summer birds in winter dress. According to a belief persisting in some parts of the world to this day, swallows and swifts do not migrate, but spend the winter in hibernation. (Swifts and swallows do migrate, just as most other Northern Hemisphere birds do.) Another old and charming, but untrue, legend enlists the aid of the stork in getting small birds to and from winter quarters: Small birds are said to hitch rides on theEuropean stork’s back.

It is clear why Northern Hemisphere birds fly south in the fall; they go to assure themselves of food and a more favorable climate for the winter months. It is also clear where most of the migrants come from and where they go. Years of birdbanding have disclosed the routes of the main migratory species.

But there are other aspects of migration that remain, for all our powers of scientific investigation, as puzzling and mysterious to modern man as to the ancients. Why do migrant birds come north each spring? Why don’t they simply stay in the warm tropics the whole twelve months of the year? What determines the moment of departure for north or south? Above all, how do birds—especially species like the remarkable golden plover, which flies huge distances directly across trackless ocean wastes—find their way?

Q9. Which of the following is the best title for this selection?

The topic of the passage is bird migration and the mystery it has presented throughout the ages.

. The last sentence of the third paragraph makes this statement.

You will find this information within the parentheses in the second paragraph.

Q12. The article proves that

This is the point of the last paragraph

Using new tools and techniques, scientists, almost unnoticed, are remaking the world of plants. They have already remodeled sixty-five sorts of flowers, fruits, vegetables, and trees, giving us among other things tobacco that resists disease, cantaloupes that are immune to the blight, and lettuce with crisper leaves. The chief new tool they are using is colchicine, a poisonous drug, which has astounding effects upon growth and upon heredity. It creates new varieties with astonishing frequency, whereas such mutations occur but rarely in nature. Colchicine has thrown new light on the fascinating jobs of the plant hunters. The Department of Agriculture sends agents all over the world to find plants native to other lands that can be grown here and are superior to those already here. Scientists have crossed these foreign plants with those at home, thereby adding to our farm crops many desirable characteristics. The colchicine technique has enormously facilitated their work, because hybrids so often can be made fertile and because it takes so few generations of plants now to build a new variety with the qualities desired.

Q13. Which title best expresses the ideas of the paragraph?

Choosing the title for this paragraph takes more than one reading of the paragraph. This is not an easy question. After a couple of readings, however, you should be able to conclude that the all-inclusive subject of the paragraph is the remodeling of plants. An equally correct title, not offered here, might be “Uses and Effects of Colchicine.”

Buried in the middle of the paragraph (lines 6–7) is the sentence: “It creates new varieties with astonishing frequency, whereas such mutations occur but rarely in nature.”

Q15. Colchicine speeds the improvement of plant species because it

This question becomes easy to answer after you have dealt with the previous question.

Q16. According to the passage, colchicine is a

The third sentence states that colchicine is a poisonous drug.

About the year 1812, two steam ferryboats were built under the direction of Robert Fulton for crossing the Hudson River, and one of the same description was built for service on the East River. These boats were what are known as twin boats, each of them having two complete hulls united by a deck or bridge. Because these boats were pointed at both ends and moved equally well with either end foremost, they crossed and re-crossed the river without losing any time in turning about. Fulton also contrived, with great ingenuity, floating docks for the reception of the ferryboats and a means by which they were brought to the docks without a shock. These boats were the first of a fleet that has since carried hundreds of millions of passengers to and from New York.

Q17. Which title best expresses the main idea of this selection?

The selection is about the beginning of steam ferryboat service.

Q18. The steam ferryboats were known as twin boats because

See lines 3–4, where it states that the boats were “known as twin boats, each of them having two complete hulls united by a deck or bridge.”

Q19. Which statement is true according to the selection?

The next-to-last sentence discusses Fulton’s invention of floating docks for the ferryboats.

Q20. Robert Fulton worked in the

1812 was in the nineteenth century.

In the context of the paragraph, shock must refer to the impact of the boat running into the dock.

Q22. The first steam ferryboats were built to

The first line of the passage states that two of the first steam ferryboats were built for crossing the Hudson River.