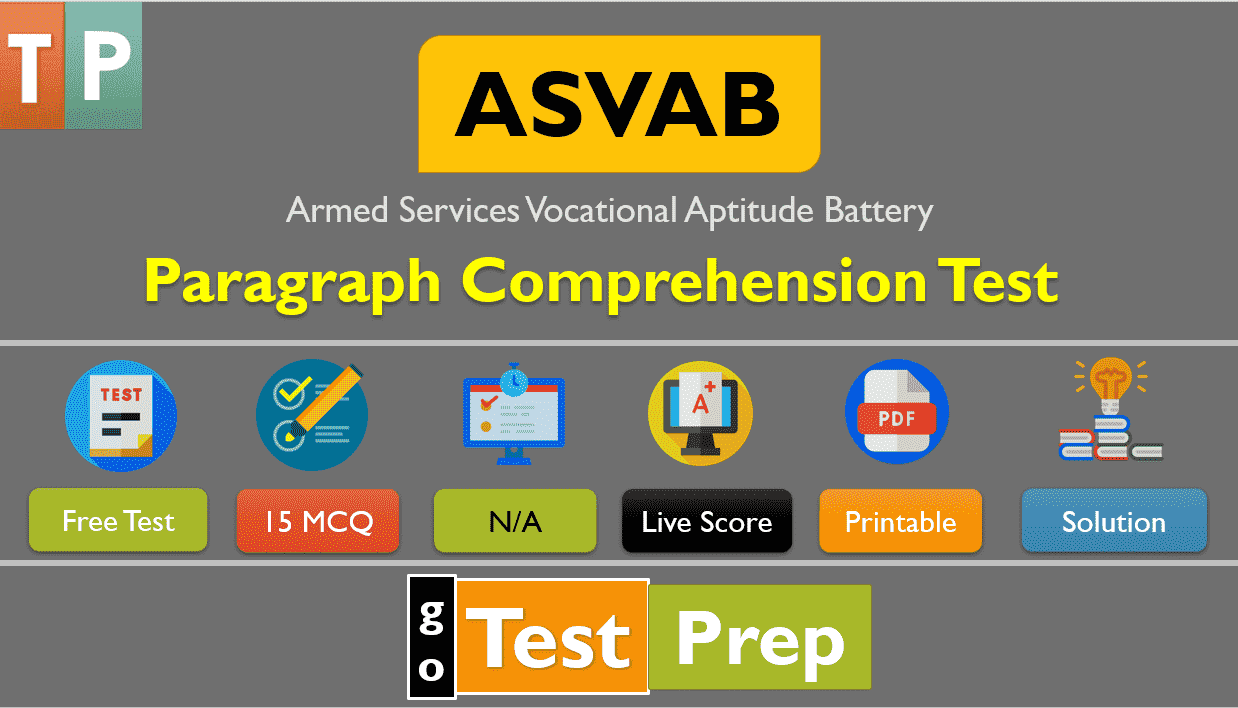 Paragraph Comprehension (PC) tests the ability to obtain information from written material, Students read different types Of passages Of varying lengths and respond to questions based on information presented in each passage. Concepts include identifying stated and reworded facts, determining a sequence of events, drawing conclusions, identifying main ideas, determining the author’s purpose and tone, and identifying style and technique.

The following ASVAB Paragraph Comprehension Practice Test is only for reference purpose, it’s not an actual exam test questions. You can download our free ASVAB Paragraph Comprehension Practice Question in PDF (printable and editable), this will help you to make better ASVAB Test Prep offline. You can also use these files (PDF, DOC) as worksheets.

This is a test of your ability to understand what you read. In this section, you will find one or more paragraphs of reading material followed by incomplete statements or questions. You are to read the paragraph and select one of the four-lettered choices which BEST completes the statement or answers the question.

The evidence is growing and is more convincing than ever! People of all ages who are generally inactive can improve their health and well-being by becoming active at a moderate intensity on a regular basis.

Regular physical activity substantially reduces the risk of dying of coronary heart disease, the nation’s leading cause of death, and decreases the risk of stroke, colon cancer, diabetes, and high blood pressure. It also helps to control weight; contributes to healthy bones, muscles, and joints; reduces falls among older adults; helps to relieve the pain of arthritis; reduces symptoms of anxiety and depression; and is associated with fewer hospitalizations, physician visits, and medications. Moreover, physical activity need not be strenuous to be beneficial; people of all ages benefit from participating in regular, moderate-intensity physical activity, such as 30 minutes of brisk walking five or more times a week.

Despite the proven benefits of physical activity, more than 50 percent of American adults do not get enough physical activity to provide health benefits. Twenty-five percent of adults are not active at all in their leisure time. Activity decreases with age and is less common among women than men and among those with lower income and less education. Furthermore, there are racial and ethnic differences in physical activity rates, particularly among women. Insufficient physical activity is not limited to adults. More than a third of young people in grades 9–12 do not regularly engage in vigorous-intensity physical activity. Daily participation in high school physical education classes dropped from 42 percent in 1991 to 32 percent in 2001.

Physical activity can bring you many health benefits. People who enjoy participating in moderate-intensity or vigorous-intensity physical activity on a regular basis benefit by lowering their risk of developing coronary heart disease, stroke, non-insulin-dependent (type 2) diabetes mellitus, high blood pressure, and colon cancer by 30–50 percent. Additionally, active people have lower premature death rates than people who are the least active.

Q1. Which of the following best represents the main idea of this passage?

There is nothing in the passage indicating that people need to be convinced to exercise (choice B), so that is not a correct option. The same can be said for strenuous versus moderate exercise (choice D), as no such comparisons are made in the passage. It is true that exercise is good for preventing heart disease and for preventing stroke, but the passage does not indicate that exercise cures anything (choice C). The main thrust of the passage is that moderate exercise has many positive benefits. Choice A is the correct answer.

Q2. Which of the following can be inferred from this passage?

Q3. According to the passage, which of the following is not a benefit of regular exercise?

The passage does not mention anything about fatty acids. Choice C is the correct answer.

Q4. According to the passage, which of the following is true?

In the third paragraph, the passage clearly states that 25 percent of adults do not exercise in their leisure time. Choice A is the correct  nswer.

Q5. About what percent of Americans do not get enough exercise to obtain health benefits?

The passage states that more than 50 percent of American adults do not get enough physical activity to provide health benefits. Choice D is
the correct answer.

During the first decade of the nineteenth century, the geographic image of western North America began to change dramatically. Based on the observations of the explorers Meriwether Lewis and George Rogers Clark, information gathered from native people, and Clark’s own cartographic imagination, this image evolved from an almost empty interior with a hypothetical single mountain range serving as a western continental divide to an intricate one showing a labyrinth of mountains and rivers. A continent that had once seemed empty and simple was now becoming full and complex.

The Lewis and Clark expedition established the precedent for army exploration in the West. Major Stephen H. Long’s Scientific Expedition (1819–1820) advanced that tradition, this time centering attention on the central and southern Great Plains and the Front Range of the Rockies. For the first time, an American exploring party included professional scientists (a zoologist and a botanist) and two skilled artists. While not every future American expedition took along such skilled observers, the pattern was set for increasingly scientific exploration.

It would take another 50 years after Lewis and Clark to complete the cartographic image of the West we know today. Other explorers and mapmakers followed, each revealing new geographic and scientific details about specific parts of the western landscape. But this revealing process was not a simple one. New knowledge did not automatically replace old ideas; some old notions—especially about river passages across the West—persisted well into the nineteenth century. In the decades after Lewis and Clark, the company of western explorers expanded to include fur traders, missionaries, and government topographers, culminating in the 1850s with the Army’s Corps of Topographical Engineers surveying the southwestern and northwestern boundaries of the United States as well as the potential routes for a transcontinental railroad. By the time of the Civil War, an ocean-toocean American empire with borders clearly defined was a fact of continental life.

Q6. Which of the following best summarizes the passage?

You need to read the passage carefully because it is somewhat complex. The passage indicates that the thought or perception or  nderstanding at the time was that the West was geographically somewhat simple, that it was empty, and that it had only a single mountain range (choices A and C), but those ideas were proven incorrect. There is no information on discovering rivers (choice D). The passage states that what Lewis and Clark discovered was a far more complicated geographic landscape than they had originally thought. Choice B is the orrect answer.

Q7. In the passage the word labyrinth most nearly means

A labyrinth is a structure with winding passages; it is a maze. The only word that conveys that message is jumble.

Q8. According to the passage, which event set the pattern for scientific exploration in the West?

Q9. According to the passage, which of the following is true?

There is no indication that Lewis and Clark’s actions did anything to help the fur traders (choice A) or that the fur traders boosted the economy of the United States (Choice B). The passage also does not give credit to the mapmakers for scouting out the route for the railroad. The only option that is true is choice C, that Lewis and Clark used information provided by native people.

Q10. According to the passage, what group of people were most instrumental in setting the pattern for more scientifically oriented exploration of the West?

Heroes were an important part of Greek mythology, but the characteristics that Greeks admired in a hero are not necessarily identical to those we admire today. Greek heroes are not always what modern readers might think of as “good role models.” Their actions may strike us as morally dubious.

For example, consider the encounter between the legendary Greek hero Odysseus and the Cyclops. The Cyclops was one of a race of giants who lived by themselves on a remote, rarely visited island. The name Cyclops means “round eye,” because these giants had only one eye in the middle of their forehead. They lived in caves, tended flocks of sheep, and ate the produce of their fields; they were shepherds.

Odysseus visited the island as part of his exploration to look for supplies. He brought with him a flask of wine. Although he was regarded as an intruder by the Cyclops, he helped himself to the giant’s supplies without permission. The Cyclops became very angry. To ease the anger, Odysseus served him some wine. The Cyclops enjoyed the wine and asked for more. Later, when the Cyclops is in a wine-induced stupor, Odysseus attacks him in the eye. Later Odysseus brags to his comrades about blinding the one-eyed creature.

This does not mean the Greeks admired thievery and bragging, however. What they admired about Odysseus, in this instance, was his capacity for quick thinking. Odysseus was also known for pulling off great feats with panache and self-confidence.

Whether or not a given action or quality was admired depended upon its ultimate results. Being headstrong might succeed in one instance but lead to failure in another. The Greeks held the characters in their legends accountable for their actions, and a hero might be punished as well as rewarded.

Q11. In this passage, what is the meaning of the word dubious?

Q12. Based on this passage, why did the Greeks admire Odysseus?

The passage explains that the Greeks admired Odysseus because of his quick thinking. Choice A is the correct answer.

Q13. According to the passage, what was Herakles known for?

Q14. What is the major idea in this passage?

The passage indicates that it is not true that all Greek heroes were admired for the same reasons, so choice D cannot be correct. Although
Odysseus was indeed a murderer (choice A) and a thief (choice B), the best answer is choice C, that the Greeks judged their heroes by their
results.

Q15. What was the major occupation of the Cyclops?

The passage says that the Cyclops were shepherds. Choice D is the correct answer.