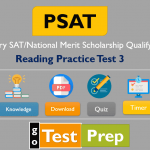 The passages below are followed by several questions about their content. Read each passage carefully and answer the questions based on what is stated or implied in the text.

The worst and longest economic crisis in the modern industrial world, the Great Depression in the United States had devastating consequences for American society. At its worst (1932–1933), more than 16 million people were unemployed, more than 5,000 banks had closed, and over 85,000 businesses had failed. Millions of Americans lost their jobs, their savings, and even their homes. The homeless built shacks for (5) temporary shelter—these emerging shantytowns were nicknamed “Hoovervilles,” a bitter homage to President Herbert Hoover, who refused to give government assistance to the jobless. Farmers were hit especially hard. A severe drought coupled with the economic crisis ruined small farms throughout the Great Plains as productive farmland turned to dust and crop prices dropped by 50%. The effects of the American depression—severe unemployment rates and a sharp drop in the production and sales of goods—could also be felt abroad, where many European nations were still struggling to recover from World War I.

Q1. The passage is most likely an introduction to which of the following?


The passage briefly summarizes the main effects of the Great Depression, including record unemployment, bank closings, and homelessness. Although it does not refer to the early causes of the economic crisis, it does explain what ruined small farms and further deepened the Depression. Thus, this passage would be an effective introduction to a discussion of the causes and effects of the Great Depression. The focus is clearly on the impact of the crisis in America, so choice a is incorrect, and the passage covers many consequences of the depression, not just unemployment (choice d). There is no suggestion that the author will propose a change in how economic crises are handled (choice c) or a mention of economic conditions today, so choice e is also incorrect.

Q2. The author cites the emergence of “Hoovervilles” (line 5) as an example of

Lines 5–6 state that shantytowns were called “Hoovervilles” because citizens blamed their plight on the Hoover administration’s refusal to offer assistance. This suggests that Hoover didn’t handle homelessness effectively, but it doesn’t comment on Hoover’s overall handling of the crisis, so e is incorrect. According to the sentence, Hoovervilles were shacks built by the homeless, so it could not refer to a federal housing program (choice a) or a new kind of social program (choice d). Choice b may be true, but the passage does not directly support this claim.

The sentence states that the severe drought and economic crisis together ruined small farms, so coupled most nearly means combined. None of the other choices makes sense in the context of the sentence.

Snake venom is one of the most effective methods of self-preservation in the animal kingdom. It is, essentially, toxic saliva composed of different enzymes that immobilizes prey. One type of toxin, known as a hemotoxin, targets the victim’s circulatory system and muscle tissue. The other is called a neurotoxin, and it affects the nervous system by causing heart failure or breathing difficulties. Although deadly, some snake (5) venoms have been found to have curative properties. In fact, toxinologists, herpetologists, and other scientists have used the venom of a Brazilian snake to develop a class of drugs that is used to treat hypertension.

Q4. What is the best synonym for immobilizes as it is used in line 2?

From the context of the passage, it can be deduced that immobilizes is synonymous with incapacitates, because lines 2–4 explain that the effects of venom include targeting the muscle tissue and causing breathing difficulties.

Q5. The final sentence of the passage (lines 5–6) serves primarily to

The second-to-last sentence (lines 4–5) introduces the general idea that some venom has curative properties. The last sentence (lines 5–6) illustrates this by providing a concrete example of some venom’s curative properties. The last sentence does not explain how medicines are derived from snake venom (choice a), nor is its purpose to show how evolutionarily advanced snakes are (choice b) or that Brazilian snake venom has more curative properties than other snakes (choice d). Although the final sentence does introduce the idea that some venom is used to treat hypertension, it does this to expand on the statement made in the previous sentence, not merely to introduce a new concept, as is incorrectly suggested by choice e.

Passage – 3
About the Aristotle’s view on friendship.

If you have ever studied philosophers, you have surely been exposed to the teachings of Aristotle. A great thinker, Aristotle examines ideas such as eudaimonia (happiness), virtue, friendship, pleasure, and other character traits of human beings in his works. In his writings, Aristotle suggests that the goal of all human beings is to achieve happiness. Everything that we do, then, is for this purpose, even when our actions do not explicitly demonstrate this. For instance, Aristotle reasons that even when we seek out friendships, (5) we are indirectly aspiring to be happy, for it is through our friendships, we believe, that we will find happiness. Aristotle asserts that there are three reasons why we choose to be friends with someone: because he is virtuous, because he has something to offer to us, or because he is pleasant. When two people are equally virtuous, Aristotle classifies their friendship as perfect. When, however, there is a disparity between the two friends’ moral fiber; or when one friend is using the other for personal gain and or (10) pleasure alone, Aristotle claims that the friendship is imperfect. In a perfect friendship—in this example, let’s call one person friend A and the other friend B—friend A wishes friend B success for his own sake. Friend A and friend B spend time together and learn from each other, and make similar decisions. Aristotle claims, though, that a relationship of this type is merely a reflection of our relationship with ourselves. (15) In other words, we want success for ourselves, we spend time alone with ourselves, and we make the same kinds of decisions over and over again. So, a question that Aristotle raises, then, is: Is friendship really another form of self-love?

Q6. The primary purpose of the passage is to

The passage clearly introduces and discusses one subject area of Aristotle’s many philosophical musings: friendship. Choice a is incorrect because the passage addresses one topic covered by a particular philosopher, not philosophy as a whole. While the passage does call Aristotle a great thinker, its primary purpose is not to prove this, making choice b incorrect. While the passage does state that human beings are motivated only to achieve happiness and that friendship may be a reflection of self-love, the passage does not intend to show that human beings are egoistical hedonists, thus making choice c incorrect. Choice e is incorrect because, although the passage ends in a question, it does not aim to leave the reader with an unanswered question, but rather to extrapolate one of Aristotle’s points on friendship.

Q7. According to Aristotle, helping a friend get the job she always wanted by writing a recommendation letter would be an example of

According to Aristotle, someone in a perfect friendship wants success for his friend. Although choice a seems like the right choice, the passage never defines what it means to be a virtuous person, nor does it give any examples of this kind of person. The same is true for choice b. Although helping a friend get a job is an unselfish act, the passage does not define or exemplify an unselfish act. Choice d is illogical, and choice e is a concept that is never addressed in the passage.

Context is a big clue here. The sentence before (lines 8–9) introduces the idea that equally virtuous people form perfect friendships. Line 9 uses the word however, which suggests a contrasting, or opposite idea to the one in the previous sentence.

Q9. According to the passage, if A befriends B only because A enjoys B’s sense of humor, this would imply that